The Theatre of the Oppressed workshops against Islamophobia – Jordi Forcadas 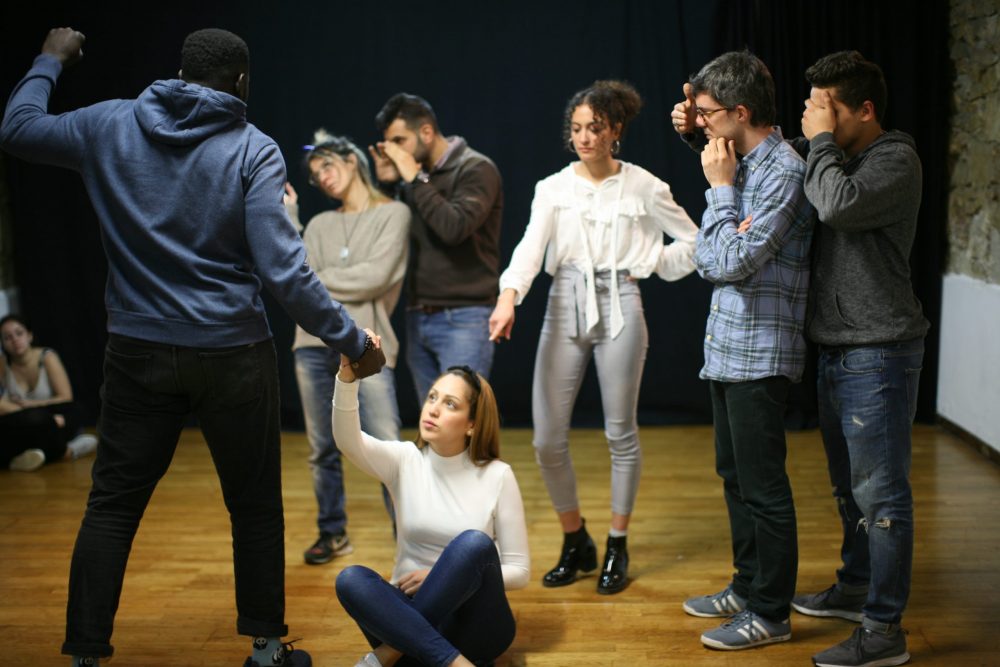 Forn de teatre Pa’tothom implemented 3 workshops that have been held by Jordi Forcadas. Two workshops were held in February and it was interrupted by the health crisis. So there is another one after, conducted in October.

The workshops had, in addition to the objective of informing about Islamophobia, to meet new people to invite them to make and participate in a group to set up a play against Islamophobia.

Summary and ideas that came out during the workshops

The most part of the participants in our workshop were women and muslim.
Image of injustice or oppression:

1. Restaurant: when the waitress brings the letter to the table, she asks a girl if she understands Catalan because she deduces that due to her physical appearance she is a foreigner and the two friends who accompany her get angry and ask the waitress for explanations.
Some common interpretations that have come out to debate this image have been racism and imposition by the waitress. It has also been commented that this image is a very common phenomenon in our society and examples have been given of some other situations such as the continuous harassment of the police in search of illegal substances, or the way we have to challenge people who have physical traits different from ours, etc.

2. Allegorical image: Justice is represented by a moving scale and manipulated by a puppeteer as if she were a puppet of threads, while democracy covers her eyes and only allows her to see what she wants. In addition, economic power, represented by politicians, pays the judiciary to tip the scales in their favor.

3. Two girls with a veil walking down the street are harassed by a boy and a girl who disagree with the use of the veil. The boy points at them and laughs at them and the girl grabs the handkerchief from one of them and asks for an explanation.
This image has been very powerful to debate and many everyday situations have arisen in which similar actions occur. Some ideas and reflections that have come out that I found interesting, among others, are that when we see a woman wearing a veil we only think “oppressed Muslim woman wearing a veil” and as Lola López said in the talk is that The modern Western view is that “a good Muslim woman is the one who stops wearing the veil outside her country” and another to end “from a very young age we have introduced some beliefs and stereotypes that we constantly repeat.”

4. The older brother introduces them to his brother and sister to his partner who is Muslim and wears a veil.

• Note: All the proposed games and dynamics have been very well received and the students have been 100% participatory, this attitude has broken against all odds with the previous idea that some of the participants may feel uncomfortable with some dynamics by physical contact or by the issues to be addressed. Once again this is one of so many prejudices, which we have to work on, of the modern Western view towards Muslim people.

All the interpretations and debates that have come out about this image have been very interesting. We have been able to deduce that there are two cities within Barcelona; the Barcelona with the washed-out face that wants to show to the tourism and the “real” Barcelona where we can find all these social inequalities.

Image readings:
• People who support the central image of the Muslim girl are empowered and try to help her so that she is too, but at the same time it gives the feeling that the empowered people speak softly, are not heard and end up being silenced by the voice of those around them and reject them.
• The boy who speaks in his ear may be transmitting rumors about Muslim people or he wants his listener to think like him (there is talk of indoctrination), he could also represent the media and his manipulation of information.
• “The person who wants to see is blocked, don’t go there, let’s go, don’t find out”
• This image could represent how society faces such situations: people who want to see and get involved with the problem but find all kinds of obstacles, others who get stuck, passive people who do not care at all, d others who reject or attack, who are afraid, who support, and so on. We also find signals within the same peer group.
• “Society makes you feel small and it would be important to have support”
• “Why do I have to justify myself for being who I am?
• “Empowerment is a transition to equality. But you have to be aware of how you want to empower yourself and what path to take towards that change. The first step is to become aware individually and then collectively.”

With the collaboration of SOS Racisme Catalunya.